Tejon Outlets – There are deals to be had. 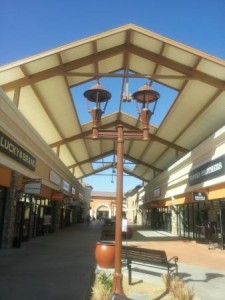 The last time I came down the 5, heading back to Studio City from areas North… I noticed a sign just before the Grapevine that said Tejon Ranch. It seemed important, so I Googled it when I got home. What I found was interesting, it is a massive pile of land (the largest private land holding in SoCal) that is used mostly for ranching. The folks at Tejon Ranch grow almonds, pistachios, walnuts, wine grapes, as well as managing a bunch of cows. I think this is interesting because I don’t grown anything except  few tomatoes here and there. And my luck with those has been pretty bad the last couple of years.

So, I’m not much of a shopper… but like you, I like a good deal. I’ve been known to visit an outlet once in a while. The folks at the Tejon Outlets, right at the base of the Grapevine, hosted some bloggers at an Outlet Crawl. I tossed the kids in the car and drove. I took the 170 to the 5. Of course, the kids kept asking for my phone but I held out and we played some car games. Their favorite is guess my animal. When it’s the little one’s turn, it’s always a kitty cat.

After an uneventful drive we turned off the highway and into the outlet’s parking area. They’re doing some construction, so while there are already a lot of stores I’m guessing they will be expanding further. We made our way over to Guest Services to say hi. This is something my wife taught me, coupons and discounts are available for the asking. No magic words, handshakes or codes are necessary. That should be everyone’s first stop at any outlet.

I like to get the lay of the land before I dig in, so we did a lap around and stretched our legs. It was tough to keep the girls out of the stores, but I wanted to see what sales were happening and where, before pulling out the plastic. Recon done, we grabbed a bite at the Mexican joint. I can’t say it was as good as my local joint, but we all liked it well enough and the service was great. There’s also a food court where you could find the usual suspects like burgers, pizza, a bowl place and a Subway. There’s also an ice cream shop… I’ll get back to that.

Fed and happy, we hit the stores. There were some great deals to be had, 3 for 1 items, half off this and add the coupons to the mix and we walked out with significant savings over what we would have paid at traditional retail stores. I want to mention also, that the staff everywhere we went were pleasant and helpful.  Like, over the top crazy helpful but in a good way.

I had made a promise to my girls… and I keep my promises.  We had heard great things about Dewars Ice Cream so that was our last stop before jumping back in the car.  I made them split a banana split with me. The older one was not happy with my decision and got red in the face, it took her a few minutes to warm to the idea but eventually she was digging in. There’s a camaraderie that builds when you share a bowl of ice cream. Try it. So after a healthy sugar rush and and anticipating the impending crash, we climbed into the car. A quick nap later (for them) and we were home.

If you’re looking to save some bucks, the Outlets at Tejon can make that happen.

I was compensated for this post. It’s not like it was a million dollars and it didn’t color my view.

← Previous
Next →
almondsoutletsshoppingtejon
Things to Do