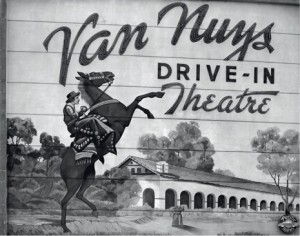 Stay near the car! Stay near the car! That was my mom’s mantra and we heard it over and over and over while images of dancing sodas, french fries and hot dogs played on the enormous screens over our heads. In my memory it’s more vivid than Danny Zucko’s hormonal spikes and Sandy in her poodle skirt from the movie Grease. Danny should have known better than to try what he did, Sandy was a good girl. It wasn’t just my parent’s voices. Everyone’s parents were shouting out commands to their kids as they darted in and out of the parked cars those long nights, first on Long Island and then here in the SF Valley. It wasn’t just here or there, it was universal. We were kids being kids.

Some might say these theaters were a fad since they came and most went. There were hundreds in the SoCal area at one time and more than 4,000 across the US. They now number only in the hundreds nationwide, but left an indelible mark on my time as a kid. Having such great memories, I was happy to hear one is coming back. 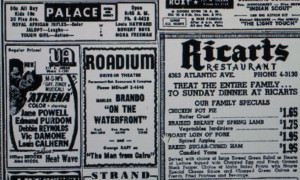 An old theater in the city of Paramount (once called the Roadium) is bringing sexy back this spring, it’s been flying under the radar as a swap meet since their screens went dark. But the projectors will soon roll again. Now they’re digital and instead of a squawky box hanging from your window it’s Dolby Digital through your car’s own stereo. It has just changed ownership and sources mention that a member of the original owner’s family is still involved. The LA Business Journal says that local developer Modern Development is planning to show second-run movies at discounted prices ($9 for adults, $3 for kids). They have two spanking new 75 foot screens and there’s talk of a smart phone app you can pop open to order food. It’s not exactly your mom and dad’s drive-in. I hope they get hi-HI-tech and deliver my nachos via drone helicopters directly to my car.

This isn’t the only Drive-In SoCal, here’s a list of what’s out there.

If you know of others, let me know!